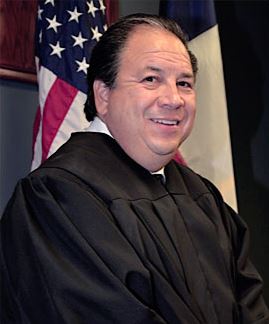 Judge Vazquez took office on January 1, 2013, following a tenure of 18 years as a practicing attorney and seven (7) years as a Municipal Court Judge for the City of San Antonio.

At the Municipal Court, Judge Vazquez effectively reduced daily jury settings by almost 50% and had more dispositions than previously experienced in the Code Compliance/Environmental Court.

Judge Vazquez has dedicated a substantial part of his life to public service. He once served as Chief of Staff to Federal Judge Orlando L. Garcia when Garcia was a State Representative and has held many community positions including City of San Antonio Zoning Commissioner Board Member, coach of various youth athletic organizations, and Neighborhood Association President.

He was born and raised the youngest of five (5) children in West Huisache in the Beacon Hill neighborhood and attended Beacon Hill Elementary, Mark Twain Middle, and Edison High Schools. Because of the challenges faced by his Mexican immigrant parents, education was ardently emphasized as a key to a better quality of life. Roberto was instilled with these values early in life.

He attended the University of Texas in Austin and graduated from UTSA. He received his law degree from Thurgood Marshall School of Law. Married for over 25 years, he and his wife Karen have two (2) sons and a daughter.

Which Precinct
Am I IN?
Community Map

Which precinct am I in? Community Map

If you are unsure of what precinct you reside in, visit the Bexar County Community Dashboard Map to view your precinct and your elected officials.