The History of The Texas State Seal

The First Congress remedied this situation in 1836 when it passed a bill providing that "for the future the national seal of this republic shall consist of a single star, with the letters 'Republic of Texas,' circular on said seal, which seal shall also be circular." 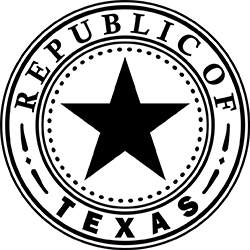 After initial hopes for the quick annexation of Texas into the United States grew dim, the Third Congress modified the seal and created a national arms in 1839: 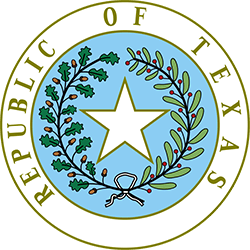 When Texas joined the Union in 1845, the new state constitution retained the seal, changing only the word "Republic" to "State." The 1845 constitution declared, "There shall be a seal of the State, which shall be kept by the Governor and used by him officially. The said seal shall be a star of five points, encircled by an olive and live oak branches, and the words 'the State of Texas.'" 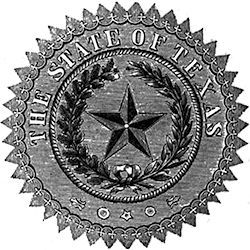 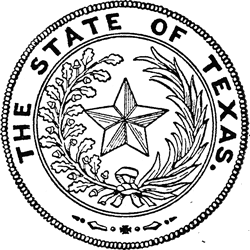 By 1991 almost twenty different versions of the state seal were in use on state letterhead and publications. The decision was made to standardize the state seal.

The Texas State Seal Advisory Committee researched the history of the state seal and recommended that the Texas Memorial Museum's 1960 watercolor by Henry W. Schlattner be used as a model. In addition, the committee developed standard black and white art of the state seal and state arms (the star and the live oak and olive branches) for use by all state offices, departments, and agencies. Juan Vega of the Texas Water Development Board designed the art. The secretary of state adopted the art in June 1992 as the official designs of the state seal and arms.

Learn more about the Texas State Seal at the Secretary of State website. 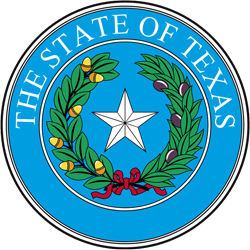 Seal of the County of Bexar

General state law does not require counties to adopt a seal. However, laws do provide seals for the County Commissioners Court, County Clerk, and other county offices.

Counties commonly have a seal or symbol to identify the county unofficially. Many have adopted symbols with the lone star and live oak/olive branches in the center.

Bexar County has adopted the Texas State Seal with the words "The State  of Texas" and "County of Bexar". 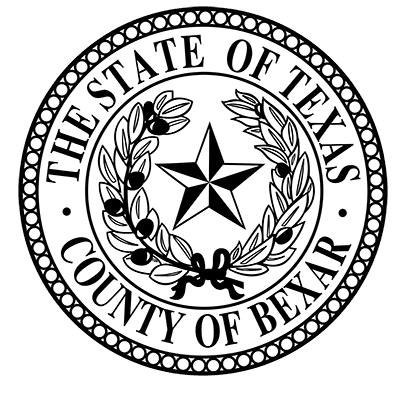 Seal of the County of Bexar

Adopted by Commissioners Court on December 22, 1972, this Official Coat of Arms for Bexar County combines four heraldic fields topped with a coronet. A banner below the heraldic fields bears the word "Bexar".

Represented at the upper left are the arms of Don Alvaro de Zuniga, Duke of Bexar in Spain, including the gold chains of Navarre, which in Spain corresponded to today's United States Medal of Honor.

The eagle on the lower left represents both the Aztec eagle of Mexico and the American bald eagle.

At lower right, the cannon represents the battles for independence of the Republic of Texas as well as the Texan support of the Confederacy in the Civil War.

The coronet surmounting the quadrants of the shield represents a duke of Spain.

The coat of arms was designed by Thomas A. Wilson and illustrated by Ramon Vasquez y Sanchez, with the cooperation and approval of the Spanish government and appropriate organizations in both Texas and Spain. It was confirmed and approved by Fernando Muñoz Altea, King of Arms of the Royal House of Borbón-Two Sicilies. 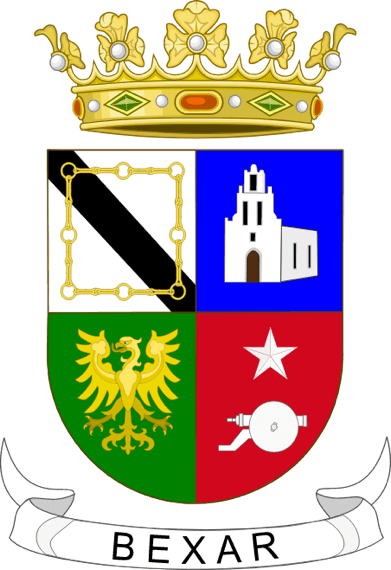 The Coat of Arms is still used today in variation by several Bexar County departments.

"Records on the Run" Mobile Unit