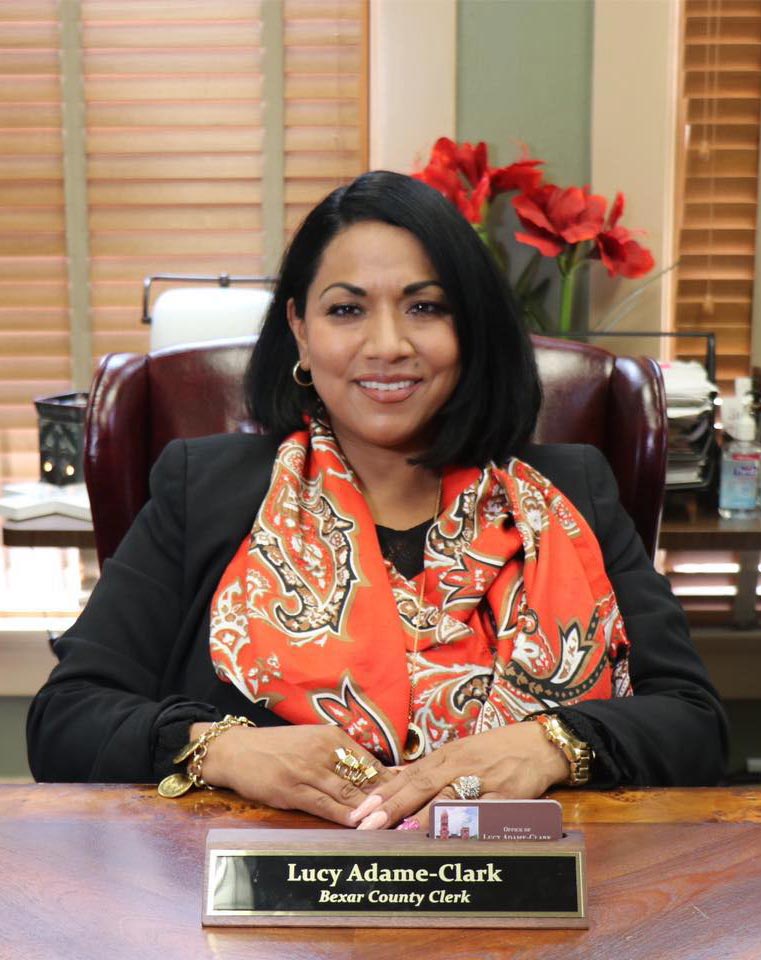 Lucy Adame-Clark is the first Latina and first woman elected as Bexar County Clerk. She was born and raised in San Antonio. Mrs. Adame-Clark is a mother of two beautiful children and the wife of a sheriff’s deputy.

Prior to becoming Bexar County Clerk, Mrs. Adame-Clark started her career with the Sheriff’s Office in 1997. In January 2008 she was promoted to the Criminal Investigation Division section as a Latent Print Examiner/AFIS. As a latent print examiner she worked with high profile cases throughout the county and across the state to include working directly with ATF, TX DPS, FBI, and 21 different municipalities. Mrs. Adame-Clark also worked in the Criminal Investigation Division and worked for five (5) years with Criminal Warrants. Throughout her tenure with the Bexar County Sheriff’s Office, Mrs. Adame-Clark continued receiving continued education, certifications, accreditations where needed, and also earned TCOLE hours to include FBI training for IAFIS. In 2009, Mrs. Adame-Clark became an active member of the International Association for Identification. Mrs. Adame-Clark left the Bexar County Sheriff's Office December 31, 2018 after 21 years.

Mrs. Adame-Clark serves as the Bexar County Treasurer and is a member of the Bexar County Bail Bond Board. Her duties as County Clerk include maintaining the records of Commissioner’s Court, County Probate and Mental Health Courts, and 15 County Courts at Law. She is in charge of recording all public records, including real property and vital statistics records such as marriage licenses and assumed names. She also maintains the Spanish Archive records from the 1700s representing Bexar County’s foundation.

* An irregularity appeared in this election. John Young was charged with voting twice in an election and his bond signed by James L. Trueheart.