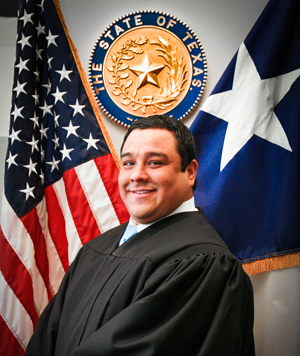 Judge Carlos Quezada was elected to the 289th Juvenile District Court of Bexar County in November of 2018.  In this capacity, he holds the task to preside over this general jurisdictional court, with a preference for juvenile matters, in addition to two specialty court programs:  Men In Need of Direction Court (M.I.N.D. Court) and Juvenile Drug Court.

Judge Quezada is a proud graduate of Harlandale High School and a lifelong resident of San Antonio’s south side.  So it was with great honor and pride that he was able to serve as President of the Harlandale ISD school board.

Judge Quezada received his Associate’s degree from Palo Alto College in 2002.  He continued his undergraduate education at St. Mary’s University and received his Bachelor of Arts in political science with a minor in criminal justice in 2004.  He later attended Thurgood Marshall School of Law and received his Juris Doctor degree in 2008.

Judge Quezada began his legal career by serving as an assistant jury room bailiff in Bexar County.  After law school, he served the Webb County community as a felony state prosecutor and fought for justice to be fairly dispensed.  Later, he returned back to his roots, the county near and dear to his heart.  This time, though, he returned as a dedicated attorney to serve his very own Bexar County community.