Designed in the distinctive Romanesque Revival style by renowned architect, James Riely Gordon, its cornerstone was laid in 1892 and the grand Courthouse was completed in 1897. A masterpiece of native Texan granite and red sandstone, roofed in distinctive green and red tiles. It was the fifth seat of government in Bexar County, the first four having been ruled by a succession of governments and political entities including Spain, Mexico, The Republic of Texas, The Confederate States of America, and the United States. Each of the four predecessor buildings were located within two blocks of the existing historic courthouse, in the heart of downtown San Antonio.

Since its creation as a part of New Spain, Bexar County has been under the political rule of several countries. These layers of historical change have been reflected in the architecture of Bexar County's courthouse. 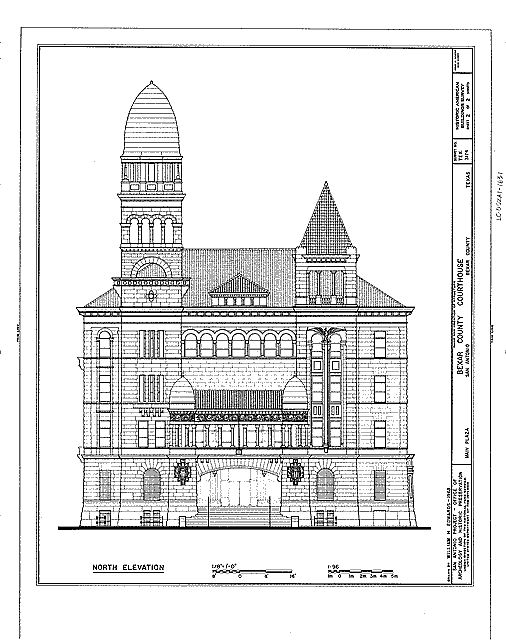 Since 1897, the Courthouse has had four major additions. The first occurred in 1914 and the second was an extensive remodeling and expansion in 1927. Those additions were sufficient to meet the County's space needs until 1963 when an additional 9,000 square feet were added. That and another inappropriate addition built in 1972 added almost 39,000 square feet at the southwest corner of the building. Following the Courthouse Master Plan, approved in 2000, the '63 and '72 additions were removed by spring of 2015, restoring the Courthouse to its 1927 grandeur. That project scope also included extensive landscaping on the south end of the Courthouse block. County fathers have also been sensitive to the need to restore interior spaces of the Courthouse. Over time, many courtrooms that were originally designed to be two floors in height were divided into separate floors to capitalize on space. An ongoing effort has been underway to restore courtrooms to their original double height space.

J. Riely Gordon (1863-1937) was a brilliant architect of courthouses throughout the United States. Gordon's specialty was constructing public buildings mainly in the Romanesque Revival style. The prolific Mr. Gordon designed 72 courthouses and hundreds of other notable public buildings, including the Arizona State Capitol, during his lifetime. Internationally renowned for his architectural genius, Mr. Gordon served thirteen consecutive terms as the President of the New York Society of Architects.

Many believe the Bexar County Courthouse to be an especially magnificent county courthouse, due in part to Mr. Gordon's personal affinity of San Antonio. He moved to Bexar County as a child with his mother and his father, a civil engineer. As a young San Antonian architect, his first major design job was to supervise the construction of the San Antonio Federal Courthouse and Post Office in 1869.